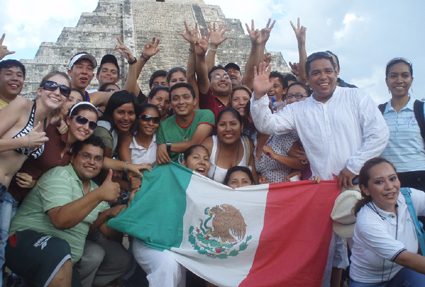 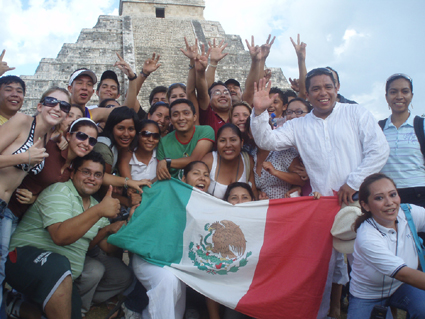 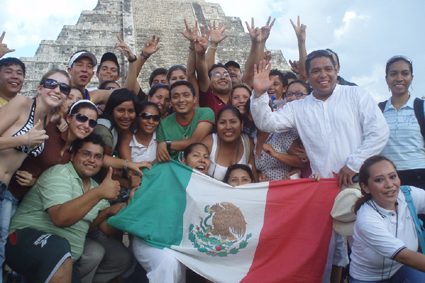 (Editor’s note: This article originally was published in 2007 not long after New7Wonder contest named Chichen Itza one of the Seven New Wonders of the World)

On July 7, 2007, Chichen Itza’s El Castillo (Temple of Kukulcan) was named one of the new Seven Wonders of the World, after a worldwide vote by telephone and Internet.

The other six sites are the Taj Mahal in India, the Great Wall of China, Petra in Jordan, Brazil’s statue of Christ the Redeemer, Peru’s Machu Picchu, and the Colosseum in Rome. The Pyramids of Giza received an honorary place on the list, as it is the last remaining monument of the original Seven Wonders of the World.

Story behind the contest

The idea to name seven new wonders was the brainchild of Bernard Weber, a Swiss adventurer and entrepreneur. The original seven wonders, which was based on a list invented in Greece more than 2,000 years ago, no longer exist, save for the Great Pyramid at Giza, Egypt. Weber decided the time had come too name a replacement seven.

In 2001, Weber created the New Open World Foundation, which eventually generated a list of more than 100 possible candidates. These were submitted to a panel of experts, which in 2005 whittled the number down to 21:The Acropolis The Alhambra Angkor Chichen Itza The statue of Christ the Redeemer The Colosseum The statues of Easter Island The Eiffel Tower The Great Wall of China The Great Pyramid at Giza Hagia Sophia Kiyomizu TempleThe Kremlin and St. Basil’s Cathedral Machu Picchu Neuschwanstein Castle Petra The Statue of Liberty Stonehenge Sydney Opera HouseT he Taj Maha Timbuktu

The New Open World Foundation then created one of the world’s largest popularity contests. Anyone with access to a telephone or the Internet could vote for their favorite seven monuments. Originally the plan was to have the contest end on Jan. 1, 2007, but someone got the bright idea to hold off until July 7: 7/7/07.

The contest got a little slippery. At one point, voters were casting ballots for the giant pyramid, El Castillo. At other times, it appeared to be a vote for Chichen Itza.

On February 28, 2007, Bernard Weber, the Swiss organizer behind the campaign, came to Yucatan to formally induct Chichen Itza as one of the 21 finalists. “This pyramid contains information of great importance and is one of the privileged sites that must be preserved to celebrate and to honor the memory of a great culture,” he said.

There were speeches aplenty on that day. Yucatan Governor Patron said, “Chichen was constructed in Yucatan and this great city represents not only a great civilization but also a center of knowledge-gathering that the inheriting yucatecos of this race today are justly proud.”

“This archaeological zone is one of the biggest sources of pride in Mexico,” said regional INAH director Federica Sodi. “We take great pride in the knowledge that people worldwide want to come to know this place.”

Yucatan’s tourism secretary, Jorge Torre Loria, indicated that “if Chichen Itza is named one of the seven, it is going to be very important for the tourism in Mexico and the five states that comprise the Mayan world.”

At first some media complained that Mexico’s power structure was not taking the seven wonders contest seriously enough. With a few months left to go in the contest, that changed. The Coca-Cola Company’s Mexico division distributed millions of cans of soft drinks emblazened with the slogan, “Vota por Chichen Itza.”

The government of Mexico and the Council of Tourist Promotion of Mexico (CPTM) put more than a half-million US dollars behind the campaign to make sure Chichen won. In addition, CPTM’s image campaign promoting Mexico, almost $40 million (Mexican) of advertising and collateral distribution seen around the world, carried the slogan asking people to vote for Chichen Itza.

Telmex, the Mexican telephone monopoly, distributed countless phonecards with the slogan. And Pemex, the national gasoline monopoly, put up thousands of posters at the pumps promoting El Castillo.

Mexico was not unusual in its efforts. Other countries were also promoting their sites, among them:

Apparently the promotion efforts worked, for all of the above were named wonders.

In Europe, the British newspaper The Sun tried to promote Stonehenge (“Phonehenge,” they called it), but had to admit that Europe was lagging in its promotional efforts even though five of the finalists could be found there: the Acropolis in Athens, Greece; the Colosseum in Rome, Italy; the Eiffel Tower in Paris, France; and the Alhambra in Spain. Only the Colosseum was named (with almost no promotion).

UNESCO, the United Nations watchdog over so-called World Heritage sites, publicly separated itself from the world-wide campaign to name a new Seven Wonders of the World.

UNESCO, the United Nations Educational, Scientific and Cultural Organization, published a notice on its Web site disavowing any connection with the vote to pick a new Seven Wonders of the World. “UNESCO wishes to reaffirm that there is no link whatsoever between UNESCO’s World Heritage programme, which aims to protect world heritage, and the current campaign concerning ‘The New 7 Wonders of the World,'” the statement began.

UNESCO explained that its mandate is to identify and encourage preservation of sites of patrimony in the world. Not so the New7Wonders campaign. “Acknowledging the sentimental or emblematic value of sites and inscribing them on a new list is not enough,” it wrote.

“The list of the ‘7 New Wonders of the World’ will be the result of a private undertaking, reflecting only the opinions of those with access to the internet and not the entire world. This initiative cannot, in any significant and sustainable manner, contribute to the preservation of sites elected by this public.”

There also was criticism within Mexico of the contest. Some at INAH, the federal agency that oversees the ruins of Chichen Itza, worried about the impact the designation as a world wonder would have on the ancient city. Being named a world wonder will create an influx, Eduardo Perez de Heredia, the INAH director assigned to Chichen Itza, told Reuters. “It is going to oblige us to implement restrictions because there is a limit of 1.5 million visitors per year which cannot be passed.”

He decried as “banal” that Coca-Cola advertises the New7Wonders campaign by putting the image of El Castillo, “sacred center of the Maya,” on millions of cans of soda.

And yet, INAH also played along. It permitted Bernard Weber to hold at Chichen his media circus promoting the ancient city’s candidacy in the contest.

And two months before the announcement, INAH completed a restoration of El Castillo, cleaning every square inch of the giant building, removing dirt and moss, and replacing crumbling or failed mortar.

And the winner is?

On the day the winners were announced, INAH had capitulated to the inevitable. The organizers behind the New7Wonders campaign received permission from INAH to broadcast from Chichen Itza for its television program announcing the winners. Perez de Heredia called the New7Wonder campaign a “mediatic phenomenon” that no one can restrain.

Ironically, the cost to license the television broadcast from Lisbon was more than Mexican officials were willing to pay. As a result, when Chichen Itza was announced as one of the winners, no one saw it on television. Instead, Governor Patricio Patron’s wife announced Chichen Itza’s selection by telephone.

An estimated crowd of 8,000, lured by reduced (and eventually free) admission to the archaeological zone, were on hand at Chichen to celebrate the ancient city’s victory. Yucatan’s Governor-elect Ivonne Ortega Pacheco was the only major government official present, and she would not take office for several months.

There was a protest by fewer than 100 of the 800 vendors who invade the archaeological zone each day to sell handicrafts and trinkets. They demanded fair treatment as the descendants of the Maya people who built Chichen Itza. The governor-elect promised to work with all interests to develop a master plan of Chichen Itza that would take into account the locals who will be affected by the increased tourism from the Wonder of the World designation.

Why the vote was significant

While certainly a popularity contest, the campaign to name new wonders of the world was not a contest of elites (assuming the New7Wonders group was on the up and up). Most of the winners came from what some have characterized as Third World nations. Yet these Third World countries have technology available to the masses so that they can participate in a world-wide election over the Internet and by telephone. The idea that someone from even the poorest country can communicate with almost anyone anywhere in the world is revolutionary. For the first time in the world’s history, we are truly entering into an egalitarian age, where the poorest from the poorest country can have the same power to communicate ideas as those from the richest nations.

Another testament to how powerful the New7Wonders contest was is that none of the winners came from the so-called Western world, save for the Colosseum in Rome. And as the Los Angeles Times reported, the contest generated barely a ripple of interest in Italy, so the Colosseum won because others around the world voted for it.

Government and tourism officials in Mexico are grappling with what to do next. El Universal, a Mexican newspaper, offered ongoing and future threats to Chichen Itza in an article headlined, “Chichen Itza y sus pesadillas” (“Chichen and its nightmares”).

According to the El Universal article, Chichen as a new world wonder poses seven risks.

Official government estimates believe that the number of tourists visiting Chichen Itza will increase by more than a million in five years. According to INAH, Chichen is already near its capacity (1.2 million visitors before the World Wonder designation) and at most can handle an additional 300,000 tourists.

However, it appears that the increase in attendance has been instantaneous. Within weeks of being named, INAH reported that it was already receiving double the normal number of tourists each day.

No comments to show.